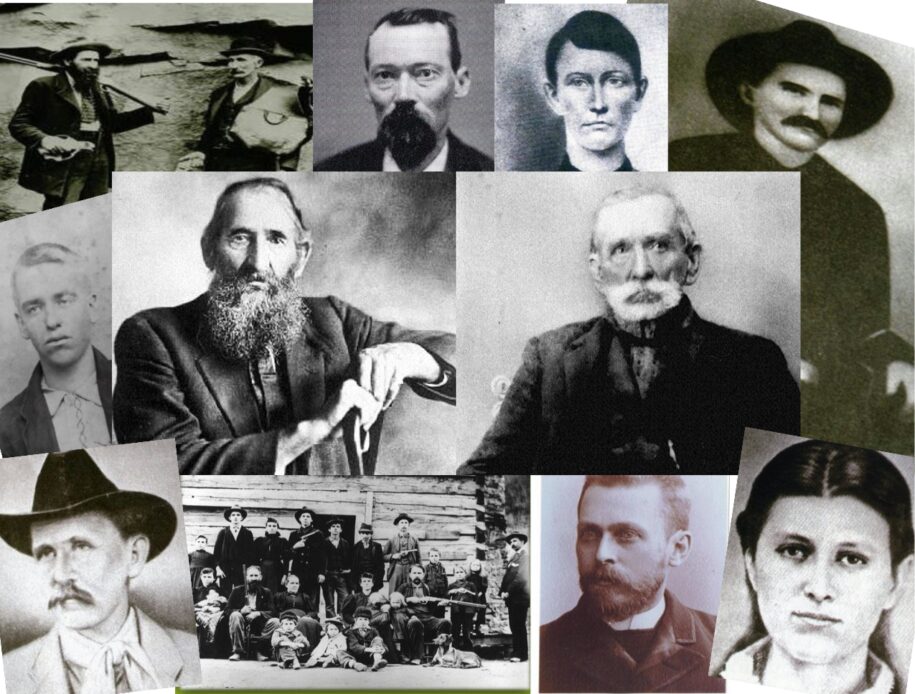 The Hatfields and McCoys. Mere mention of their names stirs up visions of a lawless family feud. It evokes gun-toting vigilantes hell-bent on defending their kinfolk, igniting bitter grudges that would span generations. Yet many people familiar with these surnames may know little about the faded history of these two families and the legends they inspired. Who were the Hatfields and McCoys, and what was the source of this vicious and violent clash between the families?

During the most heated years of the feud, each family was ruled by a well-known patriarch. William Anderson Hatfield, known as “Devil Anse,” had the appearance of a backwoods, rough-hewn mountain dweller. By the 1870s Devil Anse was an increasingly successful timber merchant who employed dozens of men, including some McCoys. On the other side of the feud stood Randolph “Old Ranel” McCoy. Though not as prosperous as Devil Anse, Randolph owned some land and livestock. Both families lived along the Tug Fork of the Big Sandy River, which snaked along the boundary between Kentucky and West Virginia, and both families had complex kinship and social networks. Family loyalty was often determined not only by blood but by employment and proximity. The families even intermarried and sometimes switched family loyalties, even once the feud had started.

The first event in the decades-long feud was the 1865 murder of Randolph’s brother, Asa Harmon McCoy, by the Logan Wildcats, a local militia group that counted Devil Anse and other Hatfields among its members. Many people—even members of his own family—regarded Asa Harmon, who had served in the Union Army during the American Civil War, as a traitor. While some have surmised that his murder set the stage for the feud, most historians now see this incident as a standalone event.

Relations between the two families continued to sour over the next decade before flaring again over a seemingly small matter: a dispute over a single hog. In 1878 Randolph McCoy accused Floyd Hatfield, a cousin of Devil Anse, of stealing one of his pigs, a valuable commodity in the poor region. Floyd Hatfield’s trial took place in McCoy territory but was presided over by a cousin of Devil Anse. It hinged on the testimony of star witness Bill Staton, a McCoy relative married to a Hatfield. Staton testified in Floyd Hatfield’s favor, and the McCoys were infuriated when Floyd was cleared of the charges against him.

Two years later, Staton was violently killed in a fracas with Sam and Paris McCoy, nephews of Randolph. Sam stood trial for the murder but was acquitted for self-defense reasons. Within months of Station’s murder, a heated affair of a different sort was set ablaze. At a local election day gathering in 1880, Johnse Hatfield, the 18-year-old son of Devil Anse, encountered Roseanna McCoy, Randolph’s daughter. According to accounts, Johnse and Roseanna hit it off, disappearing together for hours. Supposedly fearing retaliation from her family for mingling with the Hatfields, Roseanna stayed at the Hatfield residence for a period of time, Randolph McCoy was said to have dis-owned his own daughter for this reason. Although they certainly shared a romance, it rapidly became clear that Johnse was not about to settle down with Roseanna. Several months later he abandoned the pregnant Roseanna and quickly moved on. In May 1881 he married Nancy McCoy, Roseanna’s cousin. According to the romanticized legend, Roseanna was heartbroken by these events and never recovered emotionally. The real turning point in the feud, according to most historical accounts, occurred on another local election day in August 1882. Three of Randolph McCoy’s sons ended up in a violent dispute with two brothers of Devil Anse. The fight soon snowballed into chaos as one of the McCoy brothers stabbed Ellison Hatfield multiple times and then shot him in the back. Authorities soon apprehended the McCoys, but the Hatfields intercepted them and took them from the law and lead the men to Hatfield territory.

Devil Anse told everybody that he would kill the McCoy boys if his brother died, this worried Mrs McCoy as she thought she would never get to see her boys again, she was allowed to bring her boys some home made food and then Devil Anse told Mrs McCoy that he would bring her boys back to Kentucky alive either way, even if his brother died. After receiving word that Ellison had died, Devil Anse and his clan took the McCoy boys back across the river to Kentucky and then they bound the McCoys to some pawpaw bushes and moved back across the river. Within minutes, they fired more than 50 shots, killing all three brothers. Though the Hatfields might have felt their revenge was warranted, the law felt otherwise, quickly returning indictments against 20 men, including Devil Anse and his sons. Despite the charges, the Hatfields eluded arrest, leaving the McCoys boiling with anger about the murders and outraged that the Hatfields walked free. Their cause was taken up by Perry Cline, an attorney who was married to Martha McCoy, the widow of Randolph’s brother Asa Harmon. Years earlier Cline had lost a lawsuit against Devil Anse over the deed for thousands of acres of land, and many historians believe this left him looking for his own form of revenge. Using his political connections, Cline had the charges against the Hatfields reinstated. He announced rewards for the arrest of the Hatfields, including Devil Anse. With the pressure cooker gathering steam, the media started to report on the feud in 1887. In their accounts, the Hatfields were often portrayed as violent backwoods hillbillies who roamed the mountains stirring up violence. The sensationalist coverage planted the seed for the rivalry to become cemented in the American imagination. What had been a local story was becoming a national legend.

The Hatfields may or may not have been paying attention to these stories, but they were certainly paying attention to the bounty on their heads. In an effort to end the commotion once and for all, a group of the Hatfields and their supporters hatched a plan to attack Randolph McCoy and his family. Led by Devil Anse’s son Cap and ally Jim Vance, a group of Hatfield men ambushed the McCoys’ home on New Year’s Day in 1888. Randolph fled, escaping into the woods. His son Calvin and daughter Alifair were killed in the crossfire; his wife Sarah was left badly beaten by the Hatfields, suffering a crushed skull. A few days after what became known as the New Year’s massacre, bounty hunter Frank Phillips chased down Jim Vance and Cap Hatfield, killing Vance. Phillips rounded up nine Hatfield family members and supporters and hauled them off to jail. Years of legal trials unfolded as a series of courts judged the legal merits of the Hatfield case. Eventually, the case went all the way to the U.S. Supreme Court, which decided that the Hatfields being held in custody could be tried. The trial began in 1889, and in the end, eight of the Hatfields and their supporters were sentenced to life in prison. Ellison Mounts, who was believed to be the son of Ellison Hatfield, was sentenced to death. Nicknamed Cottontop, Mounts was known to be mentally challenged, and many viewed him as a scapegoat even though he had confessed his guilt. Although public executions were against the law in Kentucky, thousands of spectators gathered to witness the hanging of Ellison Mounts on February 18, 1890.

Reports claim that his last words were: “They made me do it! The Hatfields made me do it!” As the feud faded, both family leaders attempted to recede into relative obscurity. Randolph McCoy became a ferry operator. In 1914 he died at the age of 88 from burns suffered in an accidental fire. By all accounts, he continued to be haunted by the deaths of his children. Devil Anse Hatfield, who had long proclaimed his skepticism about religion, was born again later in life when he was baptized for the first time at age 73. Although the conflict subsided generations ago, the names Hatfield and McCoy continue to loom large in the American imagination.

Take a tour and learn more about the Hatfield and McCoy feud at the Dueling Barrels Brewery & Distillery in downtown Pikeville. Go Now
Schedule a Tour